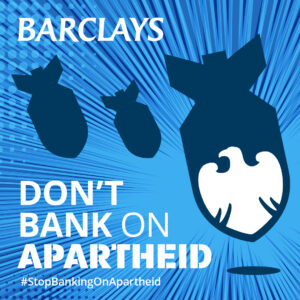 Meet at Barclays Bank to demand it stops banking on apartheid.

Militarized violence against the Palestinian people is a central feature of Israel’s occupation and
apartheid regime – including the illegal Apartheid Wall, demolitions of Palestinian homes, brutal
armed crackdowns on Palestinians protestors, and indiscriminate bombing campaigns of the Gaza
Strip.

This system is maintained through the involvement of governments and business enterprises around
the world. Financial institutions in the UK provide investment, loans, and other financial services to companies supplying Israel with weapons and military technology used to oppress Palestinians.

We’ve uncovered that Barclays Bank holds over £1 billion in shares and provides over £3 billion in
loans and underwriting to nine companies whose weapons, components, and military technology
have been used in Israel’s armed violence against Palestinians. By providing investment and financial
services to these arms companies, Barclays facilitates the provision of weapons and technology for
Israel’s militarized repression of Palestinians.

Alongside War on Want and Campaign Against Arms Trade, we’re calling on Barclays Bank to #StopBankingOnApartheid