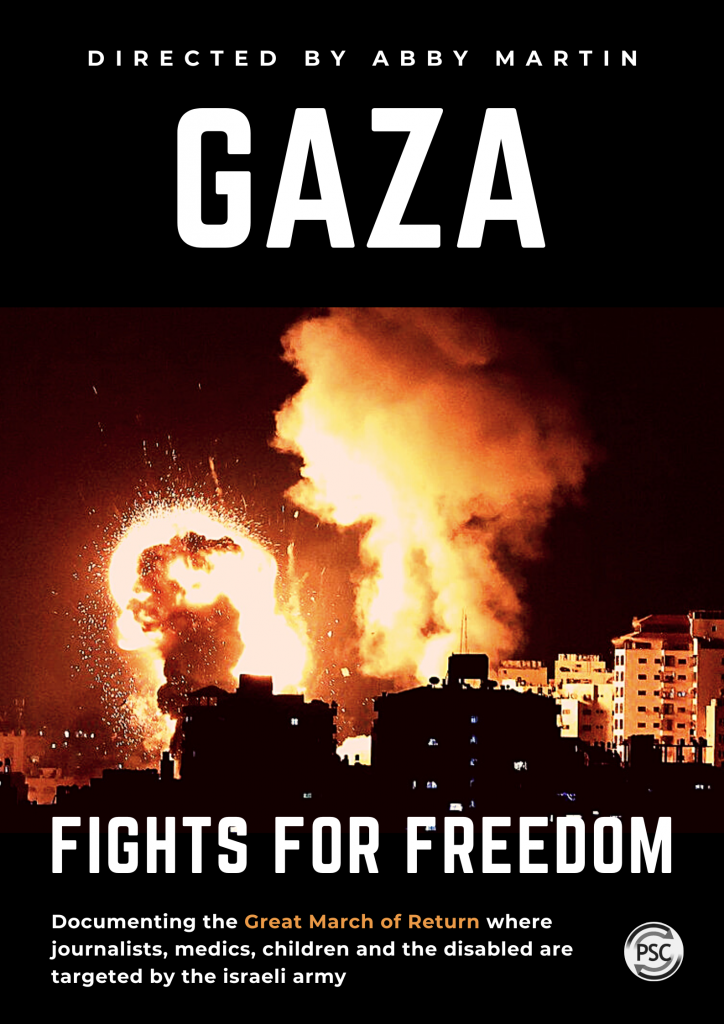 Gaza Fights for Freedom, a documentary film created by Abby Martin for Empire Files, helps its viewers peak into the terror inflicted upon the people of the Gaza Strip on a daily basis by Israel. The film begins by showing a bunch of kids playing on the beach with their father, forgetting for a moment the devastating state of their circumstances. The reality of their lives is then depicted by the footage of Gaza City which is in a constant state of ruin with almost every house damaged or resembling a pile of rubble. The documentary is shot in real time, interviewing different groups of people, ranging from families and medics to the disabled, and how they all are affected by the Israeli atrocities and narrating their traumatizing experiences first-hand.

Gaza is aptly called the world’s largest open-air prison. This film explains the geographical spread of the city and vividly displays how Gazans are not granted the most basic of human rights – freedom. If the people residing there want to leave the city for any purpose, be it for a medical checkup, or to leave the city for good, they are denied travel permits. The Israeli military do not allow them to cross any border. The water conditions in Gaza are so poor that the United Nations deemed it uninhabitable in 2020. Furthermore, they are faced with long periods of power outages which lead to food spoilage and many other dire problems.

The plot of this documentary is centered on the events of the Great March of Return. The Israeli military considers all political activities including peaceful protests illegal. This documentary interviews the families of those who have lost their lives by voicing their hopes, ambitions and the determination to get their rights. Despite the non-violent nature of the protests, Israel launches grenades and gas bombs, killing and injuring many.

“…the creators of this documentary leave the viewers infuriated at the audacity of Israel to play victim and pin Palestinians as terrorists.”

After briefly running us through the history of Palestinian suffering at the hands of Israel, the creators of this documentary leave the viewers infuriated at the audacity of Israel to play victim and pin Palestinians as terrorists. As a cherry on top, the Western media flips the entire narrative in favour of Israel, showing the world an upside-down reality. Israel regularly bombs the children of Gaza and calls it “self-defence”. Worst part? Most of the world buys it. The film further explores the use of exploding bullets used to fire at Palestinians by Israel. These bullets cut into the flesh and then explode, causing consequential injuries. These bullets have been banned under weapons conventions, yet no one questions the Israeli military for using them. This shows how disgustingly the world is lopsided and blinded towards Israel.

One cannot help but commend the bravery and courage of the people of Palestine in the face of death. One such story of a young man is highlighted in this film. Even after getting shot in the leg twice at the march, he remains stalwart and returns to the protests for the third time to fight for his people. And yet again, he gets shot, but in the head this time.

What sets this apart from other documentaries made on the same topic is that in this film, the Palestinians speak for themselves. No script, no filter, just their real and raw emotions. With this outlet, they ask for basic human rights, which they have been deprived of since as long as they can remember. Abby Martin’s other documentary films also focus on uncovering the deep-rooted issues in the world that are so often and so conveniently overlooked.

“…this film leaves the viewer questioning the injustice happening in Gaza, with no authorities to hold Israel accountable for their mass cruelty.”

Unlike other films with a climax or a dramatic showdown at the end, the creators of this film wanted to produce a fair case of justice for the people of Palestine by giving the viewers a chilling insight into the misery of men, women and children of Gaza. It does not revolve around just one or two people, because the entire city is constantly being massacred and that is what this film has strived to show.

In its revolutionary and powerful narration, this film leaves the viewer questioning the injustice happening in Gaza, with no authorities to hold Israel accountable for their mass cruelty. The world is unaware of the truth and this film urges its viewers to think – and to look for the truth in the right places.