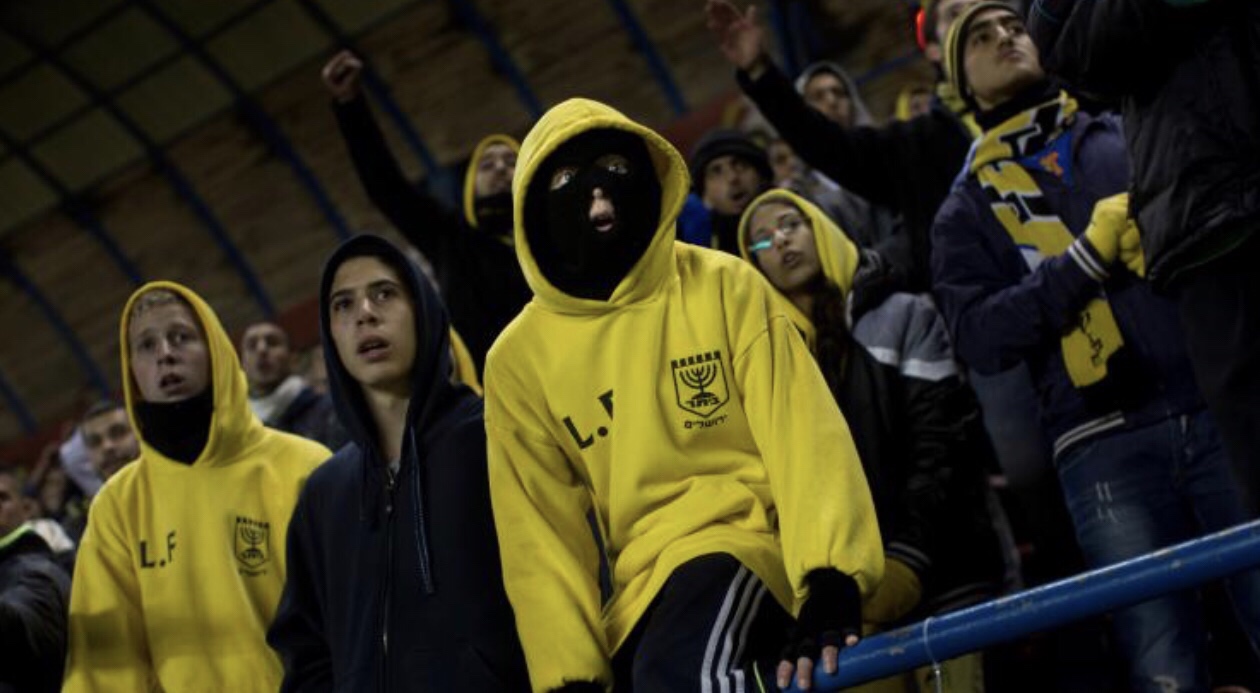 A club with supporters who openly avow racial purity and organize violent ultra-nationalist marches is third in the Israeli Premier League, behind only Hapoel Be’er Sheva and Maccabi Tel Aviv, and a hair’s breadth away from playing in the UEFA Europa League tournament. It is unconscionable that Beitar Jerusalem even reached this position; the amount of information that should guarantee their disqualification from every major domestic and international competition is staggering.

Beitar’s owner Eli Tabib announced his intention to quit after the club’s game in July 2015 against Charleroi in Belgium, citing the fans’ vandalism and violence in the form of flares fired onto the field mid-match and objects hurled injuring the opposing goalkeeper.

The Jerusalem Post reported two months ago “a large contingent from the La Familia group of hardcore Beitar Jerusalem fans helped rally supporters to the demonstration [to free the Kfir Brigade soldier, Elor Azarya], and were filmed chanting “Kahane lives!”. The soldier on trial was the one captured in Hebron, on film released by B’Tselem, murdering a previously shot, incapacitated attacker lying on his back. These extrajudicial executions are supposed to violate the injunctions issued by the Lieutenant-General and IDF Chief of Staff Gadi Eisenkot, stipulating military personnel “are obligated to fire when threats to life exist, but that when the threat is gone, there cannot be any reason to continue firing”.

Nevertheless, the former foreign minister and new defense minister Avigdor Lieberman declared, despite the law, on the steps of Kiryat Malachi’s military court, that he had come “to support the soldier and to counter-balance the gross meddling of the prime minister and defence minister [at the time Moshe Ya’alon].” If upholding the law is meddling, how does Lieberman define the company he is keeping in the form of far-right sympathisers of Kach, the fascist movement proscribed by the Knesset for Jewish terrorism and responsible for a man’s slaughter of 29 and wounding of 125 others praying at the Ibrahimi Mosque. On the other hand, this is the man who tried to make the installation of an unprecedented, ethnically selective death penalty a condition of his recruitment by Netanyahu’s struggling coalition.

When asked about his support for Beitar, Lieberman described the club with pride as the embodiment of Israeli nationalism and its right-wing. He’s one of the fans, this key minister, and as scary as it is, embodies what he’s referring to as much as the racists beside him.

Standing up for killers, rather than their victims, is a habit of Israel’s hard-right. In March we also saw the attack on the home of a key witness in the Ali Saad Dawabsheh case (where an eighteen-month-old toddler died in an arson attack by settlers), apparently small beer for religious extremists comfortable being filmed celebrating the burning of a baby, which they were according to Channel 10 footage of a wedding in Jerusalem last year.

In 2012 Beitar Jerusalem’s hyper-aggressive football fans stormed into the Malha shopping mall, looking for its Arab cleaners and other non-Jewish staff to harm. Despite CCTV footage, no one was arrested. Witnesses weren’t sufficient either; several shopkeepers in the mall stated that the football hooligans asked them for knives and other weapons. The Malha is a few hundred metres from Beitar Jerusalem’s home, the Teddy Stadium, right next to the Green Line that separates East and West Jerusalem, as if theinflaming of ethnic tensions described wasn’t sensitive and dangerous enough.

The impunity of Beitar Jerusalem’s violent racists continued in 2013 when the club’s president, Arkady Gaydamak, was bullied into retracting his signing of two non-Jewish players: the Chechen Muslims Zaur Sadayev and Dzhabrail Kadiyev. What happened next to only the fourth and fifth non-Israelis ever hired by Beitar Jerusalem was a cascade of harassment rooted in ethnic and religious hatred. Members of La Familia told the Independent’s reporter at their March 3 game that year with Maccabi Netanya that “it’s not racism, they [the Muslims] just shouldn’t be here” and another stated “the club’s existence is under threat”. The signing of the Chechens was so unacceptable to some fans that they decided (in a deed of cosmic irony unbeknownst to Zionism’s self-defeating settler advocates as they keep nurturing the egalitarian one-state solution’s inevitability) to set their club’s office on fire. One of Beitar Jerusalem’s staff lamented “all our history is gone” as he sifted through the charred remains.

The response from Beitar management wasn’t adequate. When Gaydamak tried to condemn unequivocally the supremacist philosophy that motivated the crime, by spelling out that “as far as I’m concerned, there is no difference between a Jewish player and a Muslim player”, he was contradicted promptly by team coach Eli Cohen who justified the hate surrounding him as disdain for Arab rather than European Muslims. At the culmination of his investigation in to Beitar, a case of racial hated that had picked up national and international coverage, Israel’s Attorney General Yehuda Weinstein meted out a measly fine of 50,000 shekels (or £8595) as punishment and ordered the eastern stands of Teddy Stadium be kept clear for just 5 games.

To put the bigotry into context, remember that Israeli-Arabs, most of whom are Muslim, comprise 20% of the nation. Not to mention that Arab football players, or predominantly Arab teams, have been a part of Israeli life since its founding, and teams such as Hapoel Tybee, Achei Nazareth, and Bnei Sachnin regularly participate in the country’s premier league. 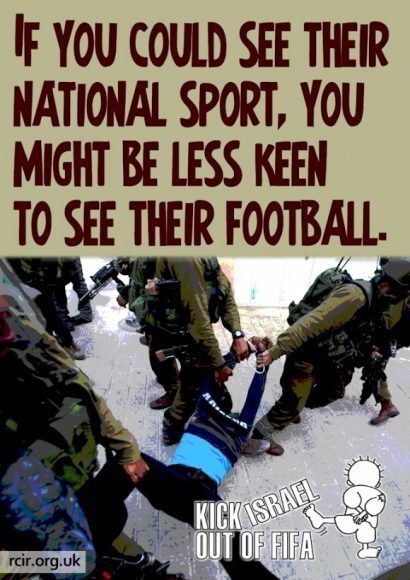 In 2012, the Mossawa Centre and the Coalition Against Racism (CAR) tried to remind FIFA, UEFA, and their subsidiary the Israeli Football Association (IFA), of their commitment to fight discrimination, with a letter requesting that each of these authorities investigate and clamp down on the racism in Israeli sport which, as the complaint clearly showed, is rampant compared to much of the European community the IFA claims to be a part of.

The Mossawa Centre cited the 2011 Bnei Sachnin game, Mohammed Ghadir’s potential signing, the 2012 Malha incident, Beitar’s winning of the Israeli Cup, the recurrent incitement of Beitar Jerusalem player Ben Shushan, Limor Livnat’s committee, and the conduct of the IFA itself.

After losing to Bnei Sachnin, Beitar fans assaulted the opposing players and threw stones through car windows, and when Beitar won the Israeli Cup their player Amit Ben Shushan shouted along with fans “I hate all the Arabs!”… the same fans used later to reject Maccabi Haifa striker Mohammed Ghadir’s expression of interest in joining the club on the ludicrous grounds that it might offend them.

Ben Shushan publicly threatened the life of individuals on the basis of race, but was only ordered by the IFA to give a few lectures on tolerance to youth groups. A pattern emerges of the IFA and other supposedly ethical, supervising organizations letting lethal extremists off the hook if they have the right ethnic profile or political leaning. When the Israeli Minister of Culture and Sports, Limor Livnat, actually convened a committee on racism in Israeli football, it didn’t include a single person of Arab descent.

How did we get to the place where the mere suspicion that Mario Balotelli broke down in tears because of abuse suffered at the hands of racist Neapolitans can spark debate in Italian and foreign sports coverage, but Israeli law enforcement officers stand by as one of their national team’s core supporters shouts “Kahane lives!” and “Mohammed is dead!” in Sacher Park? These same ‘protesters’ later asked passersby the time while listening out for Arabic or an Arab accent so they could violently assault them; assaults promised earlier on La Familia’s facebook page when they declared their intention to “march to the Wailing Wall, trampling anyone who tries to stop us or hurt us”.

Prominent Israeli public figures have shown up at more than one rally attended by the likes of La Familia and Lehava. Why wouldn’t they when Beitar Jerusalem can count among its enthusiastic backers Prime Minister Benjamin Netanyahu and defence minister Avigdor Lieberman? Such associations don’t seem to bother the PM, despite his promises to crack down on Jewish as well as Arab terrorism, and organized ultra-nationalist movements, after the revelations confirming the ties of 16-year-old Mohammed Abu Khdeir’s suspected immolators to La Familia (the men “admitted they poured petrol on him and burned him alive”, according to Israeli police spokesman Micky Rosenfeld). Finally last week, Yosef Chaim Ben-David was sentenced to life imprisonment plus 20 years, but this glimmer of hope doesn’t undermine the overwhelming truth that the Israeli Football Association stands by as fascistic violence continues all around it. The IFA must be aware that this behaviour would not be tolerated by the ruling body of virtually any other football league, or even under their own regulations were there the willpower to enforce them rather than the relentless prioritization of surface-level damage control and public relations.

Some measure of justice may have been found for Mohammed Abu Khdeir’s family, but until FIFA and all the relevant football bodies do their part, they will be complicit in the two-tier citizenship that has been institutionalised in Israel; and those Arab-Israelis who merely seek the same opportunity as their peers to play the sport they love, in dignity and without fear, will continue to go unrepresented.